Building the Future of Analytics.
Our ESG

The RiskTech for Insurance

Since 1993, the ADDACTIS Group has been working alongside global insurance players to develop risk management solutions.
Addactis’ business model is that of a solutions architect and software editor. Our legitimacy is always based on an in-depth knowledge of our clients’ business and a strong drive to technological innovation. Our added value combines a unique agile approach combined with deep expertise in analytics.

Unification of the business model under a single brand: addactis®.
Launch of the 2020-2024 strategic plan: The RiskTech.com

Opening of our Hub in Asia (Singapore).
Sale of ATEQUACY to BDO Group.
Strong Investments in Software.

Separation of the Worldwide activities into 2 entities: ADDACTIS Software, our software factory based in Lyon (France) and ADDACTIS Worldwide, distributor of our global solutions, based in Brussels (Belgium).

Opening of our Hub in Latin America (Bogota, Colombia).
Acquisition of the start-up Previsoft, based in Lyon (France).

End of Partnership with Watson Wyatt because of their merger with Towers Perrin.
Creation of ACTUARIS INTERNATIONAL to serve our existing clients out of France.

Beginning of the fruitful partnership with Watson Wyatt (exclusivity of the consulting in France and distribution Wordwide of ACTUARIS Software by Watson Wyatt).

Creation of ATEQUACY, Software and Corporate consulting about professional Risks in France, based in Paris.

The organization of the ADDACTIS Group is that of a holding company. 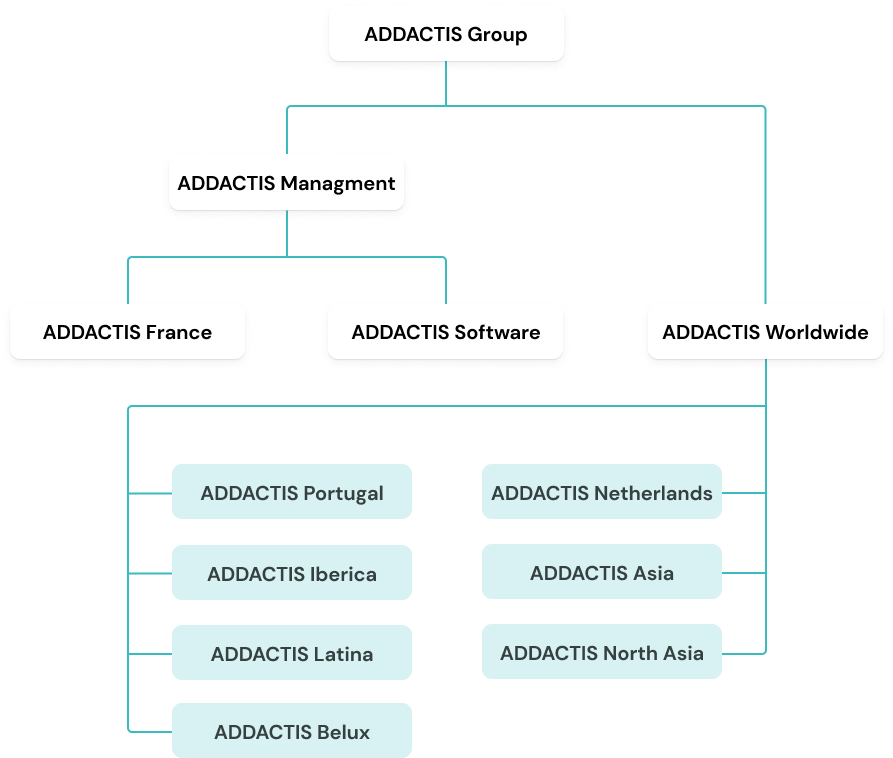 Founded in 1993, ADDACTIS Group is still fully owned by its founders and partners.
The Global Management Team currently comprises 9 C-level executives, three of whom are women.
Pascal MIGNERY chairs all the boards of directors of the group’s companies as well as the Group Management Team.
He steers the overall strategy of the ADDACTIS Group and all its subsidiaries.

A graduate of ISFA, a certified IA actuary and a member of the French and Belgian Institutes of Actuaries, Pascal began his career as an actuary at SCOR before letting his entrepreneurial spirit speaks for itself by founding ADDING in 1993.
He was the architect of the Group’s Worldwide deployment and is still daily involved in the development of addactis®.

Graduated in Finance and Accounting, Delphine spent 5 years as a consultant in an accounting firm prior to joining ADDACTIS Group in 1999.

Delphine is both Managing Director of ADDACTIS Management, in charge of supervising the group’s support functions (administration, legal, IT and finance) and a member of the GMT as Group Executive Vice President and Chief Financial Officer. For more than 20 years, she has been leading the group’s strategy alongside Pascal MIGNERY, securing and supporting its development.

After leading the Group’s main Subsidiary ADDACTIS France for 20 Years, Pierre is now in charge of the global marketing strategy, including the design of ADDACTIS Solutions and products.

Graduate from ISFA, certified IA actuary, member and jury of the French Institute of Actuaries, Pierre began his career as a life actuary in AG2R La Mondiale, joined the French Army as platoon leader, then leaded the actuarial department of Group Bayard and joined ADDACTIS Group in 1999.

With Pascal, he built the Global Insurance expertise of addactis®, deeply commited in the Group development, values and cutting edge services.

Personally, Pierre has many passions like mountaineering, arctic countries, horse riding and is involved in Climate Change issues.

Responsible for communication and corporate relations in various higher education institutions, including actuarial schools, she joined addactis in 2017. She is currently developing the group’s marketing and communication strategy and is in charge of corporate, internal communication, employer branding and digital marketing for ADDACTIS.

Franck Collignon is the CEO of ADDACTIS Software, the addactis software R&D company, based in Lyon, France.
He is a Telecom Engineer from Telecom SudParis

Prior to that, Franck has held different managing positions in various industries : IT services, management consulting, insurance & steel industry.

Céline began her career with the creation of the actuarial consulting part of the Group in 1998, until being appointed CEO of ADDACTIS France in 2018.
Thanks to her strong experience, Céline steers addactis® strategy on the French market and leads French consulting business of ADDACTIS France.

A graduate of ISFA, a certified actuary and a member of the French Institute of Actuaries, Céline is a reknown expert in actuarial health and disability matters, and certifies disability tables.

Céline helps insurers in their decision making process regarding health actuarial topics as well as business plan and portfolio values evaluation during transactions, reorganization or mergers.

Her commitment to the company project since 20 years ensures the future development of ADDACTIS France and supports the Group’s growth goals.

Governance Board of Directors

The Governance Board of Directors currently comprises 7 members.

Chairman of the Board,
Chief Executive Officer

Contacts
Learn more about the group

addactis® is a registered trademark, property of ADDACTIS Group SA, used by our companies to market their service offering.
©2021 - ADDACTIS Group - all rights reserved

We use cookies to ensure that we provide you with the best experience on our website. You have the choice to set your cookies by clicking on Settings.
AcceptDeclineSettings
Manage consent

Functional cookies, which allow us to enhance your experience (for example by remembering any settings you may have selected).

Analytics cookies, which help us measure the website’s performance and improve your experience. In using performance cookies we do not store any personal data, and only use the information collected through these cookies in aggregated and anonymised form.

Any cookies that may not be particularly necessary for the website to function and is used specifically to collect user personal data via analytics, ads, other embedded contents are termed as non-necessary cookies. It is mandatory to procure your user consent prior to running these cookies on our website.