COVID-19: Impacts on the regulatory reform in the CIMA zone

The regulatory reform on the minimum share capital of insurance companies in the CIMA zone was to enter its final phase of application. As the COVID-19 crisis could seriously affect the profitability of insurance operators in this zone, the supervisor could make some adjustments to the initial agenda.

An unsteady insurance market regulated in 2016

The insurance sector in French-speaking sub-Saharan Africa has long suffered from an image deficit, due to questionable governance policies of a handful of actors. Those were symbolized by exorbitant overheads and claims settlement rates spreading over many years.

Convinced that the consolidation of the sector’s solvency fundamentals will help stabilizing it, the supervisor decided to undertake a reform, which would have an impact on the numerical density of approved players.

However, because of the significance of these increases, intermediate target amounts to be reached after three years were decided (CFAF 3 billion and CFAF 2 billion respectively). This step-by-step approach was settled to smooth out the balance sheet impacts over time and ensure a sufficiently sustained pace to guarantee the achievement of the objectives in five years.

A reform passed without consensus and too ambitious?

As soon as it was adopted, the measure was met with an outcry, its critics mainly blaming the lack of upstream consultation with the main stakeholders. The opponents also argued that such a reform could lead to the disappearance of many players, or even entire markets in some countries where only small insurers operate.

The observed pace of compliance seemed to prove them right, since by the end of 2018 many players had not yet reached the intermediate level of share capital of CFAF 3 billion.

The graph below provides an aggregated view of the regulatory compliance status of the players in the main markets[4] of the CIMA zone. 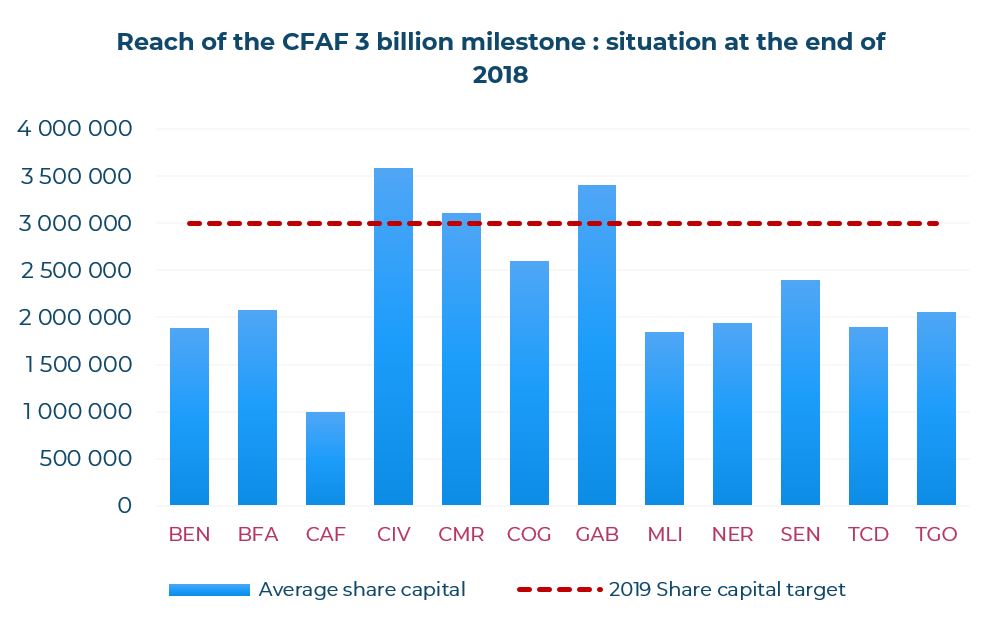 It can be seen that, a few months before the intermediate deadline set by the reform (May 2019), only the Ivorian, Gabonese and Cameroonian markets had reached the regulatory constraint overall.

However, when we look at the situation at the level of individual players, it can be noted that the situation is contrasted, even within the markets which nevertheless globally validated the regulatory constraint of CFAF 3 billion. 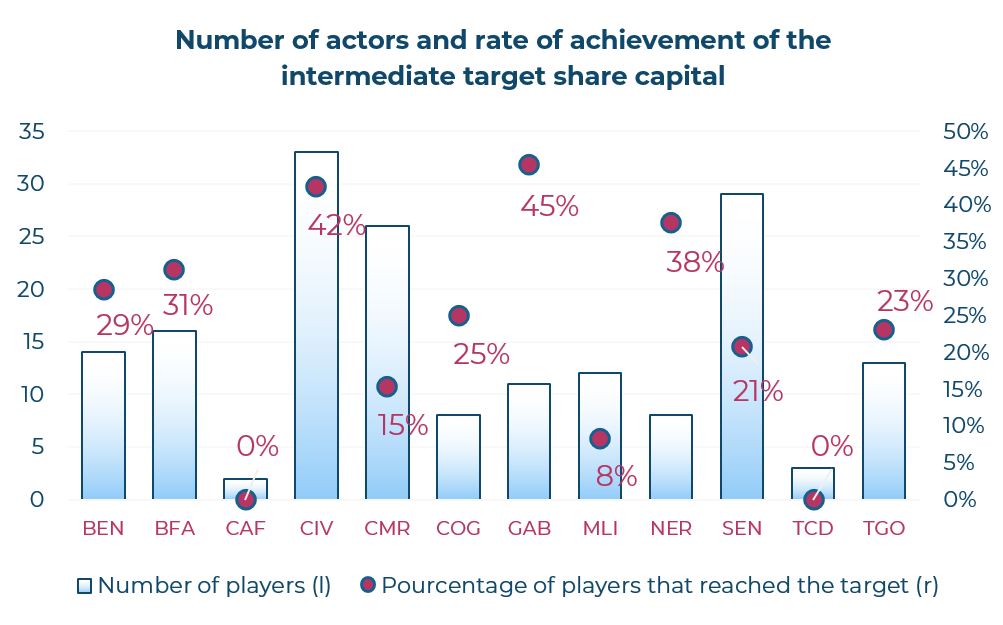 At the end of 2018, no market had reached the 50% achievement rate. The narrowest markets were those with the lowest achievement rates, even though the small number of players operating within these markets could have enabled very high levels to be achieved.

A reform with a definite impact on an already fragile profitability

Facing such levels of attainment of the intermediate target capital, it seems legitimate to question the causes of such a phenomenon, as well as the chances of reaching the level required by the reform by 2021.

An analysis of the mechanisms allowing the capital increase could explain the difficulties insurers have had in complying.

There are two main schemes: capital increases via external investors or via the incorporation of equity elements.

Therefore, two explanations seem possible: either investors did not consider the opportunity sufficiently attractive, or the results over the period 2016-2018 were not sufficient to make this increase in equity capacity. In both cases, the profitability of the sector seems to be a central issue.

The graph above is particularly instructive, and highlights three essential elements.

Firstly, it allows us to note the correlation between the level of written premiums and results, while highlighting the peculiarities, in terms of profitability, of the different markets: 1 franc of premium does not yield the same return on the Ivorian market as on the Senegalese market, for example.

Second, at the end of 2018, the return on equity levels of the CIMA zone markets were globally attractive, reaching 13% on average – and even 16% if the case of Gabon is not taken into account. However, there are wide disparities even within the countries with the highest ratios: there are at least 4 companies in Côte d’Ivoire – more than 12% – with negative operating results at the end of 2018.

Thirdly and finally, it would seem that a minimum level of written premiums will be necessary to achieve a profitability of 10%, when the minimum capital increases to 5 billion CFA francs, a minimum level that seems difficult to achieve by the narrowest markets and small companies. It should also be noted that the rate of 10% supposedly expected by investors can be justified: it would correspond to a long-term rate of a bond issued by a State in the zone, increased by a risk premium of about 400 basis points.

Moreover, it is reasonable to believe that the question of this minimum amount of written premiums, which would make it possible to obtain a sufficient return on equity once the reform was definitively implemented, played an important role in Allianz’s decision to sell some of its entities to the SUNU ASSURANCES group[5].

However, even if not all markets were able to offer 10% return to potential investors, assuming an average share capital of 5 billion CFA francs, the aggregate returns of the funds remain at acceptable levels.

In fact, Gabon still aside, assuming an average share capital of 5 billion CFA francs and levels of reserves and retained earnings equal to those of 2018, the rates of return on equity are close to the levels of coupon rates of long-term bonds issued by the states of the zone.

Nonetheless, it is the strong disparities, already mentioned, within the space markets that raise questions. The observations linking the level of written premiums and profitability may lead us to fear the worst in the current health crisis situation.

Indeed, significant reductions in premium income could be expected on non-life lines, which are the driving force behind insurance in the CIMA zone. The impact of the restriction measures could be considerable. The duration of these measures as well as their level of constraint will moreover be essential data for any attempt at quantification.

The decline in stock market indices – as of April 28, the BRVM[6]  Composite index, for example, had lost 13% of its value as of December 31, 2019 – as well as increases in risk premiums[7]  had a very strong downward impact on the valuation of insurance company assets. These elements can also weigh heavily in the balance. The major risk is that these assets, which have suffered substantial capital losses, will no longer be able to settle claims that have risen sharply. These assets, which are subject to substantial capital losses, would no longer be able to settle sharply rising claims. In this case, the issues at stake are clear as well as the implicit impacts on the financial result.

In addition, the increase in claims that is to be expected on health contracts taken out before the crisis will have to be monitored very closely.

Indeed, if this loss ratio were to deviate too significantly from the expectations used when pricing contracts, we would have to add to the already long list of identified impacts that of a practice well identified in the zone: underpricing.

There is a good chance that those players who have shown the greatest rigor in terms of pricing and provisioning, as well as those with efficient financial risk management policies and tools, will fare better than the others.

Finally, a less mentioned but equally important element is the aid that state bodies will agree to provide to players, in terms of social charges and taxes in particular. Without this aid, which was very quickly announced in France, it is not only the profitability of the sector that would be at stake, but perhaps its survival.

Unfortunately, there are not many figures at present. In an attempt to define a range within which returns on equity could evolve once the crisis has hit, we have defined two scenarios: a central and a pessimistic one.

As for the central scenario, we anticipate a 25% drop in earnings[8] for 2020. This would correspond to a fairly rapid interruption of measures, a moderate severity of the virus in the zone and a gradual and sustained resumption of activities.

The pessimistic scenario would see a 60% drop in earnings[8] for 2020. It would correspond to a continuation of measures until at least the end of the first half of the year, a reduction in cash flow and a slower business recovery.

It should be noted that the pessimistic scenario would decrease the average return on equity for CIMA zone players to 2.6%. The situation would be even worse if the Ivorian market was not taken into account. Indeed, under this assumption, the average rate of return on equity would fall below 2%.

These estimates are not predictions, but they do give an idea of how the profitability of the sector could behave under two assumptions of fixed decreases in activity. Facing such impacts, the sector would inevitably lose its attractiveness and be unable to raise the capital needed to meet regulatory requirements.

In the context of this health crisis, attempting to carry out a reform on such a scale and so capital-intensive seems perilous.

In addition to the lack of adherence by the players, the significant drop in written premiums – a direct consequence of the restrictive measures applied on the continent – in areas where collection is mainly done in agencies, could have major repercussions on the profitability of the sector in the CIMA area. Once the correlation between premium levels and profitability is established, it seems unsustainable to apply the compliance measures at the same pace as initially planned by the reform.

It is likely that the supervisor will have to announce adjustments to the reform, or even postponed it until further notice. All the more so as other supervisors on the continent have already announced easing measures such as ACAPS[9] in Morocco for instance.

Authors of the article:

Generating value for P&C insurers through Pricing Innovation in Africa, in a post-COVID-19 environment

Attaining long-term profitability is the main goal of every company, and insurers are no exceptions. The deteriorated economical conditions due to the COVID-19 crisis, will make this issue even more acute and compel insurance carriers to find the right levers to operate in order to navigate this new environment and enjoy renewed profitability.

We use cookies to ensure that we provide you with the best experience on our website. You have the choice to set your cookies by clicking on Settings.
AcceptDeclineSettings
Manage consent

Functional cookies, which allow us to enhance your experience (for example by remembering any settings you may have selected).

Analytics cookies, which help us measure the website’s performance and improve your experience. In using performance cookies we do not store any personal data, and only use the information collected through these cookies in aggregated and anonymised form.

Any cookies that may not be particularly necessary for the website to function and is used specifically to collect user personal data via analytics, ads, other embedded contents are termed as non-necessary cookies. It is mandatory to procure your user consent prior to running these cookies on our website.